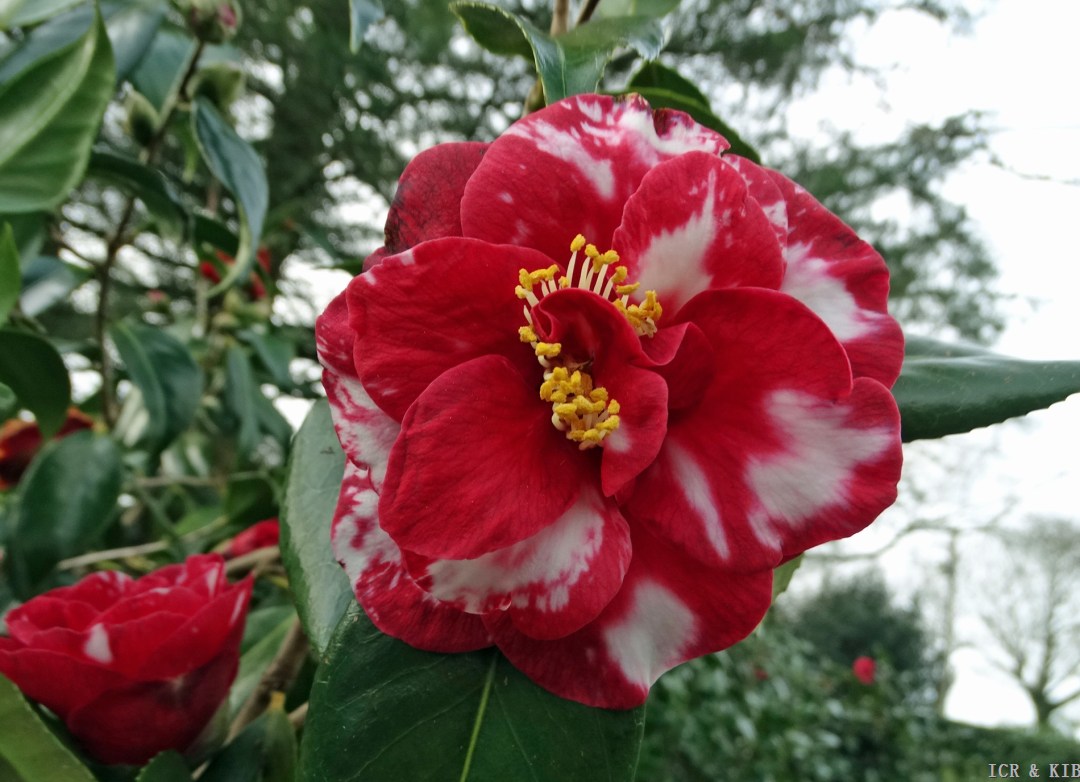 The Garden, 1911, p.249 as ‘Apollo’: Puddle & Hanger, 1961, RHS., The Rhododendron and Camellia Yearbook, No.15, pp.111-112: Semi-double, 15 petals, orbicular or oblate, 5 cm wide by 4.5 cm long, central petals smaller, with an irregular central cluster of sta­mens and a few petaloids. The colour is Turkey Red, (HCC, 721/1) occasionally blotched white.Habit, vigorous, branching and open with elliptical leaves, 10 cm x 5 cm, serrate from the middle to the apex, very shallowly serrate to the base, apex acuminate to long-acuminate, glossy, dark green. This cultivar received a RHS "Award of Merit" in 1956. It was originated about 1900 in a group of single and semi-double varieties introduced by the English nursery­man, William Paul. Both flowers and foliage are sometimes inclined to variegation and the name Apollo Variegated has been applied to the predominantly variegated form. It has been confused with another Paul introduction Jupiter, which received an Award of Merit when erroneously exhibited as ‘Apollo’. It is this confusion that causes some nursery catalogues to list it as "single to semi-double". Apollo can be distinguished from Jupiter by its deeper red, more numerous petals and its long, pointed leaves which have a slight twist. Synonyms: ‘Compton’s Brow Cherry’, ‘Compton’s Brow Pink’, ‘Paul’s Apollo’. Orthographic errors: ‘Appollo’, ‘Opollo’, ‘L’Apollo’. See black and white photo, RHS, The Rhododendron and Camellia Yearbook, 1961, No.15, pl.42.