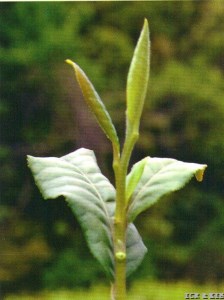 It was selected individually from the progenies of natural hybridization between the Pingyang population variety and Yunnan Daye variety in 1958~1979 by the Tea Research Institute, Chinese Academy of Agricultural Sciences. It has been popularized in the tea area of Zhejiang province and introduced to the provinces of Anhui, Jiangsu, Jiangxi and Hunan.

Plant higher, erect m shape with higher branching position and medium branching density. Leaves incline upwards. Length 11.4~12.5 cm, width 4.3~4.8 cm. Long-oblong in shape and with blunt pointed tips The surface of leaves protruding. Green in color, with slightly waved margin as well as sharp and shallow serrations. 8%10 pairs of vein. The sprouting period in spring season appears in the first ten days of March. The peak period of one bud and three leaves shoots appears in the middle of April. With medium sprouting density and vigorous sprouting ability. Shoots stout with moderate amounts of hairs. The weight of 100 one bud and three leaves shoots averaged 51.7 g. The peak period of flowering stage appears in the third ten days of October. With abundant amounts of flowers and higher bearing percentage. High resistance to cold and drought. Wide adaptability. Potent rooting ability and survival rate during the cutting propagation.

Higher-yielding. According to the comparative variety experiment, the yield of GSCT44 variety is 4.55% higher than that of Fuding Dabaicha. The yield of made tea in an area of 4 mu 7 years old tea demonstrative tea garden in the Tea Research Institute, Chinese Academy of Agricultural Sciences, averaged 260.8 kg per mu.

According to the analysis conducted by Tea Research Institute, Chinese Academy of Agricultural Sciences, the contents of caffeine in the one bud and two leaves shoots averaged 3.69%, amino acids 3.39%, tea polyphenols 17.12% and total cate-chins 160.37 mg/g. Suitable to manufacture the roasted green tea and baked green tea, and is characterized by its tightly and finely roiled leaf, emerald green in color with fragrant and refreshing aroma, fresh and full taste.

Owing to the erect shape and sparse branching density, it is recommended to reduce the row spacing, pruning and tipping in time, so as to increase the density on the canopy surface.