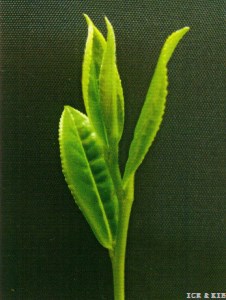 It was selected individually from the natural hybrid between Fuding Dabaicha variety and Yunnan Daye variety in 1957~1971 by Tea Research Institute, Fujian Academy of Agricultural Sciences. Now it is widely cultivated in the tea region of Fujian province and was introduced in limited area to the tea region of Zhejiang, Hunan, Sichuan and Guizhou provinces.

Plant rather high, the position of branching on the stem is rather high. Semi-opened type of growth habitat. Leaves incline upwards or horizontal. Length 11.0 -12.1 cm, width 4.7~5.1 cm. Oblong in shape and protruding on the surface. Leaves positioned internally inclined, deep green in color with glossy. Petiole violet-red in color with acuminate or acute pointed tips. Thin and soft in texture. 7~10 pairs of vein and neat serrations.The sprouting period in the spring season appears in the first ten days of March. The peak period of one bud and three leaves shoots appears in the middle of April. With uniform and high sprouting density. Shoots stout with profuse hairs and potent tenderness-keeping ability. The weight of 100 one bud and three leaves shoots averaged 64 g. The peak period of flowering stage appears in the November. With numerous amounts of flowers and higher bearing percentage. Wide adaptability. Rather higher cold-hardiness and resistance to drought. Potent rooting ability during cutting propagation.

High-yielding. According to the results of comparative experiments, the yield of made tea in the 4~8 years old tea garden averaged 229 kg per mu, and 58.9% higher than that of Fuding Dabaicha variety. In an area of 10 mu experimental plantation, the yield averaged 208.7 kg per mu.

Suitable to manufacture the black tea and green tea. The Gongfu black tea prepared with GSCT35 variety as the raw material is characterized by its bloom color with profuse hairs, full and brisk taste with the characteristic of “Dian hong” as well as clear and bright liquor. The baked green tea prepared with this variety is characterized by its silvery appearance with numerous fine hairs, strong and full taste, green-yellow liquor and light green to yellow infused leaf.

Suitable to popularize in the tea region in the south-of-Yangzte River for the manufacture of black tea and green tea.

It is vigorously grow during the seedling stage, so those techniques such as format-pruning, tipping and fostering in time are important, so as to improve the branching. After bearing into productive, it is recommended to prolong the plucking period in the autumn season approximately.