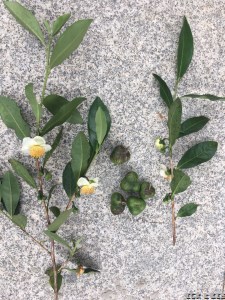 NATURE COMMUNICATIONS | (2020) 11:4447 | https://doi.org/10.1038/s41467-020-18228-8 published Chinese scientists paper: "Population sequencing enhances understanding of tea plant evolution". They assemble a 3.26-Gb high-quality chromosomescale genome for the ‘Longjing 43’ cultivar of Camellia sinensis var. sinensis. Genomic resequencing of 139 tea accessions from around the world is used to investigate the evolution and phylogenetic relationships of tea accessions. We find that hybridization has increased the heterozygosity and wide-ranging gene flow among tea populations with the spread of tea cultivation. Population genetic and transcriptomic analyses reveal that during domestication, selection for disease resistance and flavor in C. sinensis var. sinensis populations has been stronger than that in C. sinensis var. assamica populations. This study provides resources for marker-assisted breeding of tea and sets the foundation for further research on tea genetics and evolution.

It was selected individually from the Longjing population variety in Hangzhou (Zhejiang province) in 1960~1978 by Tea Research Institute, Chinese Academy of Agricultural Sciences. Now it is cultivated experimentally in 14 provinces of China. It has been cultivated in a larger area in Zhejiang, Jiangsu and Anhui provinces.

High-yielding. According to the results of comparative varietial experiments, the yield of GSCT37 is %1% higher than that of Fuding Dabaicha. A regional experiment carried out in the Shige Varietial Plantation (Yuhang county, Zhejiang.province), and Cheng county Tea Plantation, the yield is 43.6%81.7% higher than that of control variety. In a 13.19 mu 9 years old experimental tea plantation in Tea Research Institute, Chinese Academy of Agricultural Sciences, the yield of made tea averaged 347.8 kg per mu. Among these, the yield of 1.58 mu tea gaiden averaged 45019 kg per mu in 1983.

According to the analysis conducted by the Tea Research Institute, Chinese Acade% my of Agricultural Sciences, the contents of caffeine in the one bud and two leaves shoots averaged 4.00%, amino acids 3.71%, tea polyphenols 18.51% and total cate-chins 120.84 mg/g Suitable to manufacture the green tea, especially in the preparation of the flaten green tea, such as Longjing and Qiqiang. The Westlake top-grade Longjing prepared with GSCT37 variety as the raw material is characterized by its flat and smooth appearance, elegant shape, fresh green in color and cream-colored in the margin, with fragrant and durable aroma, fresh and sweet taste, clear, bright and greenish liquor as well as slight yellowish green and splendid infused leaf.

Weaker resistance to drought and lower tenderness-keeping ability of shoots. It is recommended to select those locations with deep soil layer and sufficient organic matter during cultivation. Deep ploughing and plucking in time are important. Irrigation is recommended to carry out in possible.