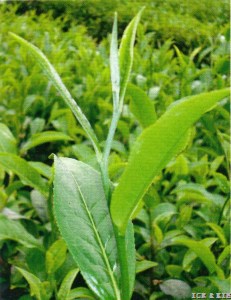 It was selected individually from the Nuoshan population variety in Menghai county, Yunnan province in 1956~1985 by Tea Research Institute, Yunnan Academy of Agricultural Sciences. It has been cultivated and popularized in the counties of Menghai, Puwen，Simou，Fengqing, Denchong, Chuangning, Lancang and Mengshen of Yunnan province. It was also introduced in a limited area in Guangxi, Sichuan and Fujian provinves (autonomous region).

Plant high. Spreading type in shape, with higher branching density. Leaves horizontal, length 13.5~14.9cm, width 5.2~5.8cm. Long oblong in shape. Thick and soft in texture. Surface of leaves protruding, waved margin with suddenly pointed tips. Dark green in color and glossy. With rough and shallow serrations. 9%10 pairs of vein. The sprouting period in spring season appears in the beginning of March. The peak period of one bud and three leaves shoots appears in the first ten days of April. With vigorous sprouting ability. Shoots stout, greenish yellow in color with profuse fine hairs. The weight of 100 one bud and three leaves shoots averaged lB5g. With average bearing percentage. Resistance to drought, disease and the cold-hardiness are higher than that of Menghai Daye variety. With potent rooting ability during cutting propagation.

Higher yielding. According to the productive experiment carried out in 1983-1984, the yield of made tea averaged 280.9kg per mu, and is 39.65% higher than that of Daheicha vriety.

According to the analysis conducted by Tea Research Institute, Yunnan academy of Agricultural Sciences, the contents of caffeine in the one bad and two leaves shoots averaged 4.84%, tea polyphenols 36.13% and total catechins 142.62mg/g. The Dian green tea prepared with GSCT51 variety as the raw material is characteriazed by its tight and fat leaf, green and glossy with fine hairs, fragrant and lasting aroma, strong and refreshing taste, yellowish and clear liquor with green and bright infused leaf. The broken black tea prepared is characterized by its tight granule, bloom in color, fragrant and lasting aroma, strong and refreshing taste, Liquor reddish in color and bright with slendid and reddish bright infused leaf.

Suitable to popularize in those tea area in the southwest and southern part of China for the manufacture of black tea, Dian green tea and Pu-erh tea. The recommendation in the cultivation is similiar to that of Yunkang 10.