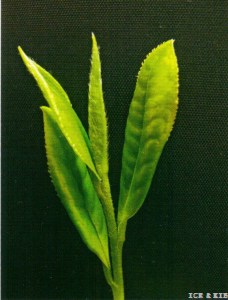 GSCT2 the series number for this cultivar in China.

Fuding Dahao Cha another speling for this cultivar.

Originated in the Wang-Jia-Yang village (Fuding county, Fujian province) and have had a cultivative history of nearly 100 years. There was only several bushes before 1950. After 1958, it was propagated and popularized. Now it is distributed all over the Fujian province. It was introduced in small amounts to the Jiangsu, Zhejiang. Sichuan, Jiangxi and Hubei provinces during the recent years.

Plant high and erect, with higher branching position and rather dense density. Branches thick. Leaves horizontal or drooping. Length 13.2~15.8cm, width 5.3~6.2 cm, oblong or nearly oblong in shape with protruding surface and inclines inwards, acuminate tips and bended downward. Leaves thick in texture with green color and glossy. 9.5 pairs of vein. Serrations shallow and rough. Overwintered buds sprout in the first or second ten days of March. The peak period of one bud and three leaves stage* shoots appears in the first ten days of April. Sprouting density moderate. Shoot stout and colored light green with profuse and thick hairs. The weight of 100 shoot? with one bud and three leaves averaged 104g. The peak period of flowering stage appears in the mid-November. The amounts of flower are moderate with lessei fruits* Tolerate to drought and frost. With vigorous rooting ability during cutting propagation.

High-yielding. The yield of made tea in an area of 59.5 mu in Guanyang village Tea Plantation (Fuding county, pujian province) averaged 375.2kg in 1985.

Suitable to cultivate in the black, green and white tea area m the region in the south-of-Yangzte River. It is recommended to select the land with deep soil layer in the establishment of tea garden. Deep-ploughing, increased applying the base fertilizer are necessary. Owing to the erect standing and rapid growing habit, it is essential tc carry out the format pruning Jn the seedling stage and reasonable tipping and cultivating, so to promote the branching and expanding of canopy.