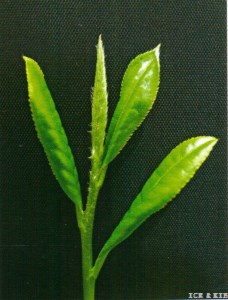 It was distributed in the tea area of Eastern Fujian Province during the early time, and was cultivated in larger area in the Zhejiang, Hunan, Guizhou, Sichuan, Jiangxi, Guangxi, Anhui and Jiangsu province since 1960s.

Plant with higher size. Semi-opened shaped with higher branching position and medium branching density. Leaves horizontal, oblong in shape. Length 10.6-13.4cm, width 5.6-5.7cm, with protruding surface and blunter tips. Leaves green in colour, hard and soft in texture 9 pairs of vein, with neat margin and medium-sharping serrations. The sprouting date in spring season is generally in the first ten days to middle of March. The peak period of one and three leaves stage shoots appears in the first ten days of April. With potent sprouting ability and moderately sprouting density. Shoots yellow-green in colour, rather stout with profuse hairs. Potent tenderness-keeping ability. The weight of 100 one bud and three leaves shoots averaged 63g. The peak period of flowing stage appears in the last ten days of October. Flowers abundant with higher bearing percentage. Higher drought-resistant and cold hardiness. With vigorous rooting ability and survival rate during cutting propagation.

According to the analysis conducted by the Tea Research Institute, Chinese Academy of Agricultural Sciences, the contents of caffeine in the one bud and two leaves shoots in spring season averaged 4.36%, amino acids 4.27%, tea polyphenol 16.19%, total catechins 113.85mg/g. The Congou Black Tea prepared with this variety as raw material is characterized by its tightly and finely rolled leaf, bloom colour, with profusely white hairs, fresh and full taste and bright reddish liquor. It is proved as the suitable raw material for manufacturing the “Bai-Liu Congou” tea. The baked Green Tea prepared with GSCTj variety as the raw material is characterized by its emerald green in colour with fine white hairs, fragment and fresh aroma, full taste and clear liquor, and is suitable as the raw material for manufacturing the high- grade scent tea. The “Yin-Zhen” special tea prepared with this variety as the raw material has white color and stout leaves.

It is recommended to cultivate in the location with deep soil layer. Deep ploughing and increased base-manuring, multi-times plucking as well as the integration of plucking and cultivating are necessary. Besides, it is important to increase the applied amount of fertilizer during the summer and autumn season.