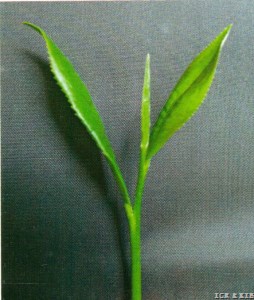 Gaoling Dabai Cha the original name for this cultivar

Clonal variety. Small arbor type. Large-leaf size. Early sprouting. Originated in the Shang-Gao-Shan village (Fuan county, Fujian province). It was only cultivated in a small area before 1970's. After that, it was widely propagated and popularized and mainly distributed in the tea area of eastern part of Fujian province. It has been introduced to Guangxi, Anhui, Hunan, Hubai, Guizhou, Zhejiang, Jiangxi, Jiangsu, and Sichuan province (autunomous region).

Plant higher and semi-open shaped. Branching moderately with long internode. Leaf positioned in an upward inclined condition. Length 13.5~16.0 cm, width 5.0~ 5.7cm. Oblong in shape and with gradually acuminate tips. Leaves smooth and glossy on the surface. Deep green in color, leaf margin inflexed and with obvious serrations. Overwintered buds sprout in the first ten days of March. The peak period of one bud and three leaves stage shoots appears in the first ten days of April. Plants wi th potent terminal growth rate and uniformly sprouting density. Shoots stout and light green in color, with rather profuse hairs and potent sprouting ability. The weight of 100 shoots with one bud and three leaves averaged 98.0~133.5 g. The peak period of flowering stage appears in the first ten days of November. Flowers larger in size, but low bearing capacity. Resistant to drought and frost, with higher rooting ability during the cutting propagation.

According to the analysis conducted by the Tea Research Institute, Chinese Academy of Agricultural Sciences, the contents of caffeine in the one bud and two leaves shoots during spring season averaged 3.83%, amino acids 1.81%, tea polyphenols 28.22%, total catechins 127.06mg/g. The Congou Black Tea prepared with this variety as the raw material has a tight twist leaves with profuse hairs and glossy appearance. Liquor with fragrant aroma as well as brisk and pungent taste. Infused leaf colored red and bright. It was proved as the best raw material for preparing the “Tanyang Congou” Tea. The Roasted Green Tea prepared with GSCTij as the raw material has a stout and straight leaves with grey-green color and profuse hairs. Liquor colored green and bright with chestnut aroma as well as fresh and brisk taste. By using GSCT3 for manufacturing the “Baihao Ningzhen” Tea, it showed obvious white hairy and stout bud, be recognized as the superb of vaious kinds of tea.

Suitable to popularize in the area in the south-of-Yangzte River and the area manufactured for the white tea.

It is recommended to cultivate in the land with deep and fertile soil layer, and multiple times of format pruning m the optimum period. To maintain the lateral branches is necessary, so as to increase the branching density.