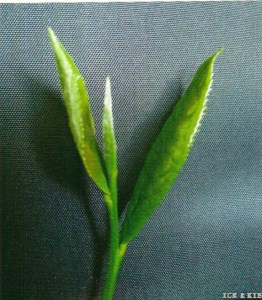 Originated in the Tieshan village (Zhenghe county, Fujian province). It has been cultivated for more than 100 years and mainly distributed in the region of Jianyang, Chongan, Zhouning and Fuan (Fujian province). There were cultivated in small area in Zhejiang, Anhui, Jiangsu, Jiangxi, Hunan, Sichuan and Guangdong province since 1960，s.

Plant high, as high as 3-%5 m under natural growing condition. Sparsely branching and branches at the higher position of plant. Erect type. Leaves horizontal, length 12.6~15.2cm, width 5.0~5.8cm. Leaves oblong in shape with acuminate tip and protuberant surface. Deep green in color and glossy, thick and brittle in texture, with 7~11 pairs of vein, margin waved and with deep serrations. The sprouting period of shoots in spring season generally appears in the first ten days of April. The peak period of shoots with one bud and three leaves stage appears in the last ten days of April*. Sparsely sprouting density and potent terminal growth ability. Shoots stout and yellow-green in color with light brown tint, with profuse hairs. The weight of 100 one bud and three leaves stage shoots averaged 123g. The peak period of flowering stage appears in the first ten days of October. However, it doesn’t bear the fruit. Strong cold-hardiness with vigorous rooting ability and high survival rate during the cutting propagation.

Suitable to popularize in the tea region in south-of-Yangzte River for the manufacture of black tea and White tea.

Owing to the erect habit, sparse branching, vigorous terminal dominance of plants, it is recommended to reduce the row spacing, lower the height of format pruning, increase the times of forma* pruning, tipping and fostering the canopy in time, so as to promote the branching of bushes. Besides, the plucking period in the autumn season can be prolonged.