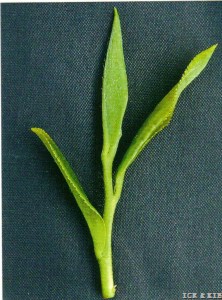 It was selected individually from the Keeman population variety in 1955~1978 by K.eemen Tea Research Institute, Anhui Academy of Agricultural Sciences, and po» pularized to those tea areas such as the counties of Huizhou, Xuancheng, Anqing and Liuan of Anhui province since 1975. It was introduced to the provinces of Jiangxi and Kunan.

Plant medium size, with high branching density. Semi-opened shape. Leaves horizontal and incline upwards. Length 9.6%10.5 cm, width 3.2%3.5 cm. Long-oblong in shape with acuminate tips. Surface of leaves flat and glossy. Soft in texture, with slightly waved margin as well as sharp and shallow serrations. Green in color. 8~9 pairs of vein. The sprouting period in spring season appears in the middle of March. The peak period of one bud and three leaves shoots appears in the middle of April. With more dense sprouting density and potent sprouting ability. The weight of 100 one bud and three leaves shoots averaged 53 g. The peak period of flowering stage appears in the third ten days of October. With less amounts of flowers and low bearing percentage. High cold-hardiness. Only a small amounts of tender leaves defoliated under the conditions of minimum temperature -12°C.

High-yielding. The yield of made tea in a tea garden of 13 years old tea bush averaged 288 kg per mu, is 19.27% higher than that of Keeman populative variety.

According to the analysis conducted by the Tea Research Institute, Anhui Academy of Agricultural Sciences, the contents of amino acids in the one bud and two leaves shoots averaged 3.2%, tea polyphenols 23.40% and total catechins 98.80 mg/g. With wide suitability. Suitable to the    manufacture of black tea and green tea. The black tea prepared with GSCT39 variety as the raw material is characterized by its tightly and finely rolled with tips, full and fragrant aroma as well as the bright reddish liquor and infused leaf, with the traditional aroma, taste and color characterized to the tKee-Hong,. The green tea prepared with this variety has a lasting aroma, full and fresh taste as well as the flavo-green and bright infused leaf.

Easy to infect with the anthracnose disease and brown blight disease in the seedling stage, it is recommended to control in time. Besides, the rooting ability  and the survival rate are affected due to the rapid growth of shoots during the cutting propagation, so it is suitable to cutting in the autumn season and pay the attention to the control of illumination, humidity and diseases.