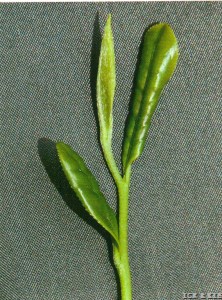 It was selected individually from the Keeman populative variety in 1955%1978 by the Keeman Tea Research Institute, Anhui Academy of Agricultural Sciences. Now it has been popularized to the tea area of Anhui province, and introduced to the provinces of Jiangxi, Henan, Jiangsu and Hubai.

According to the analysis conducted by the Keeman Tea Research Institute,Anhui Academy of Agricultural Sciences, the contents of amino acids in the one bud and two leaves shoots averaged 3.53%, tea polyphenols 24.38% and total catechins 99.11 mg/g. The green tea prepared witn GSCT40 variety as the raw material is characterized by its tightly and finely rolled leaf, green and glossy with obvious fine hairs, lily aroma, full and fresh taste. It was introduced for creating of ‘Jianhao’ in the Jiansan county of Anhui province and the ‘Taibai Yinhao, in the Henan province and showed superb quality and significant economic efficiency.

From the viewpoint of the cultivation, it is recommended to select the deep and fertile soil layer with sufficient amounts of organic matter and water supply.