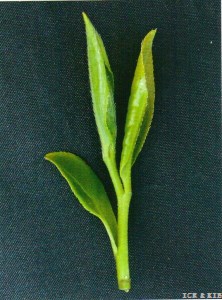 It was selected individually from the Keeman population variety in 1955~1978 by Tea Research Institute, Anhui Academy of Agricultural Sciences. Now it has been cultivated in the tea area of Huizhou, Xuancheng, Liuan, Chaowe, Anqiang and Chu counties of Anhui province. It was also introduced and cultivated in the provinces of Jiangxi, Henan and Jiangsu.

According to the analysis conducted by the Tea Research Institute, Anhui Academy of Agricultural sciences, the contents of amino acids in the one bad and two leaves shoots in spring season averaged 3.51%, tea polyphenol 25.6% and total cate-chins 112.76 mg/g. Suitable to manufacture the black tea and green tea. The black tea prepared with GSCT38 variety as the raw material is characterized by its fragrant and strong aroma, full and brisk taste, uniformly reddish infused leaf as well as reddish and bright liquor. The green tea prepared with this variety showed fresh and fragrant aroma, full taste, yellowish green and clear liquor.

Owing to the erect habitat and sparse branching of tea plant, it is recommended to reduce the row spacing, carry out the format-pruning, tipping and managing in time, so to increase the density on the surface of canopy. The tea plants are defoliate in the tea region in the north-of-Yangzte River, it is important to select those locations with suitable terrain and adopt the frost-preventing measures.