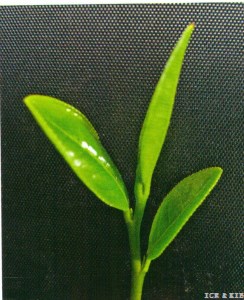 Plant medium size, without obvious main stem. Semi-opened in shape, with rather dense branching Internodes rather long. Leaves incline upv/ards or horizontal. Length 8.5~10.2cm, width 4.0~4.5cm, oblong or obvoid in shape with blunt tip. Leaves flat and inclines inwards, with neat margin. Thick and brittle in texture. Average 7 pairs of vein. Old leaves dark green in color, lack of glossy. The sprouting period in spring season appears in the  third ten days of March. With rather potent sprouting ability. Shoots rather stout,     deep green in color, with sparse hairs.  The peak period of one bud and  three leaves stage shoots appears in the middle of April. The weight of one bud and  three leaves shoot  averaged 75g. The peak period of flowering stage, appears in the middle of November. With low bearing percentage. Tolerance to drought and frost injury. Easy to cultivate. With potent rooting ability during cutting propagation and high survival rate.

Rather high-yielding. In an area of 156 mu tea garden in the Sanbing village (Changbing, Anchi county, Fujian province), the annual yield of oolong tea averaged 93.2kg per mu.

Suitable to popularize in the tea region in the south-of-Yangzte River for the manufacture of oolong tea.

With well developed rooting system and high tolerance to the fertilizer. It is recommended to increase the applied amounts of fertilizer, go as to fasten the establishment of tea garden and increase the yield. Owing to the ununiform sprouting of new shoots and the week tenderness-keeping ability, it is necessary to pluck in time and in turn. It is easy to be damaged by the mites under drought season, so it is recommended to control the pests in time.